Tnemmis fil-Palazz – Art exhibition at the Malta Society of Arts 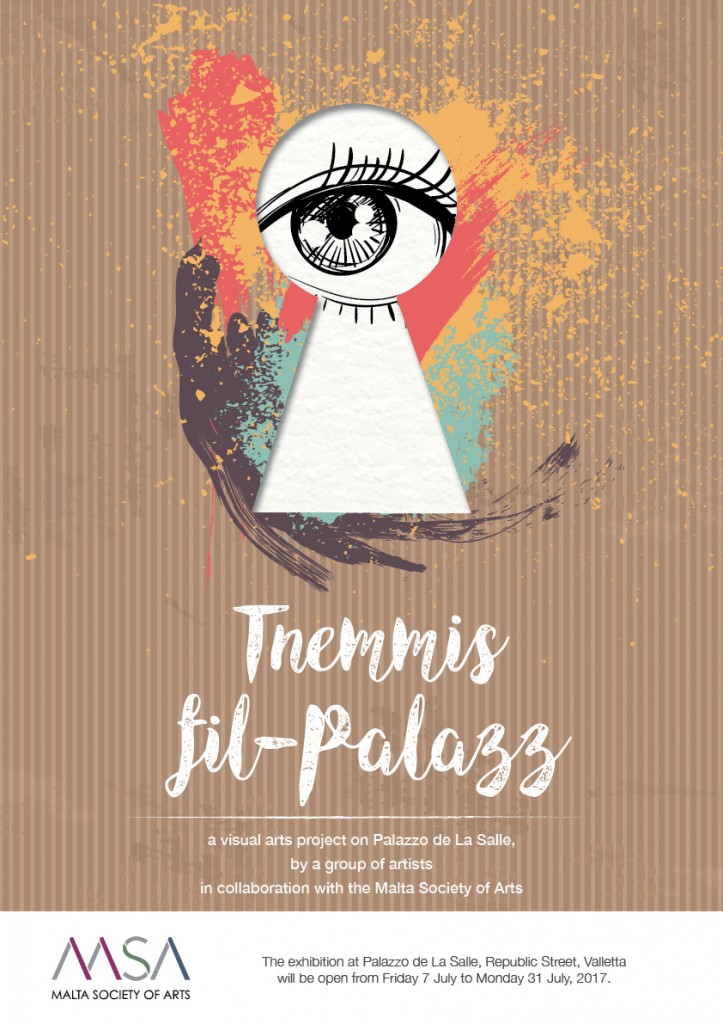 “Tnemmis fil-Palazz” is a visual arts project about the 16th century Palazzo de La Salle, the seat of the Malta Society of Arts. The idea of setting up this exhibition originated from artists who regularly attend art workshops at the MSA.  The Malta Society of Arts provided the artists the opportunity to focus on the project.

The participating artists attended a series of drawing workshops at the MSA.  The participants chose various angles and features of the building to prepare their drawings, using their artistic styles and imagination with a diversity of media.  These artistic works are now being exhibited.

This group of Maltese artists considered that this beautiful palace deserved exposure through art since all of them studied painting within the walls of Palazzo de La Salle.  The palace has some very intriguing features and character, and a very interesting history.

This exhibition is depicting the different aspects and characteristics of the building which has become to be known as Palazzo de La Salle, when it was bought from Comm. Fra Geronimo Basadonne by the Prior of Barletta, Fra Camillo Albertini.  After the death of Prior Albertini this house and its dependencies were passed on to the Treasury.  Grand Master Raymond Perellos Roccaful procured hold of the premises from the Treasury and with great regard, donated the palace to his nephews the Marquis de Dosaguas, Don Gennaro Perellos and the Count d’Albatera, Don Guglielmo Roccaful, Grandee of Spain, on condition that the Treasury was to allow the Knights, who were descendants of the Marquis de Dosaguas and of the Count d’Albatera, to enjoy the use of the premises while in the service of the Order in Malta.

For the first 71 years of its foundation the Society had no permanent residence to carry out its activities and had to move from one place to another, Palazzo Xara being one temporary seat.  In 1923 Joseph Howard, then Prime Minister, offered the use of Palazzo de La Salle to the Malta Society of Arts and to other three organisations. Incidentally Joseph Howard was the President of the MSA from 1917 to 1921 when he had to resign as he decided to serve his country as a politician. 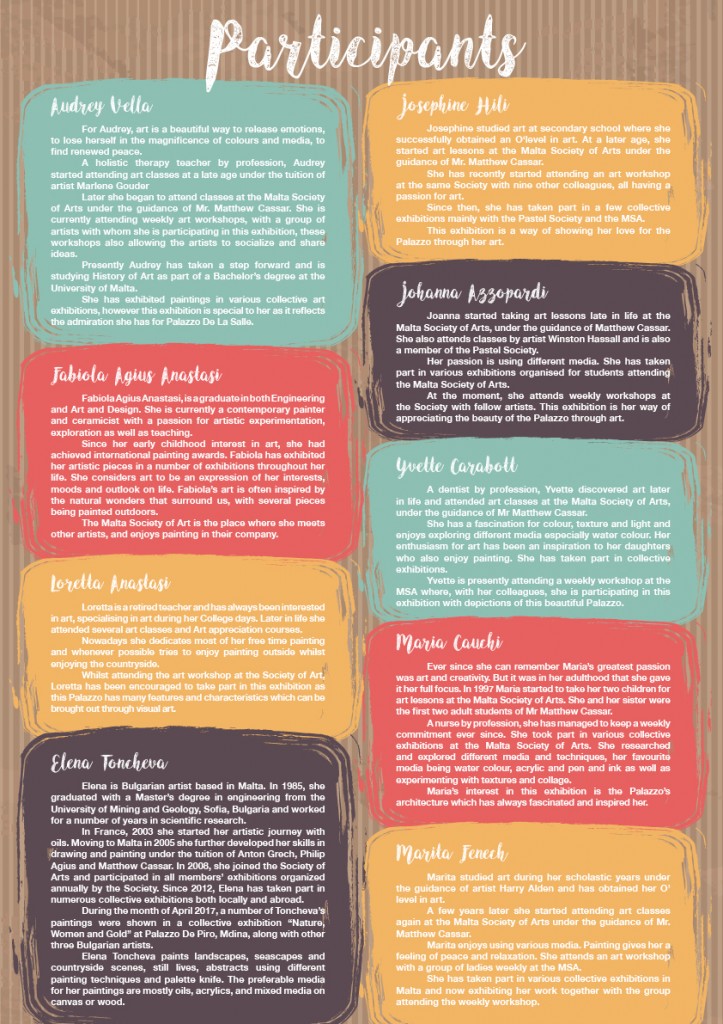 Josephine studied art at secondary school where she successfully obtained an O ‘level in art.  At a later age, she started art lessons at the Malta Society of Arts under the guidance of Mr. Matthew Cassar.

She has recently started attending an art workshop at the same Society with nine other colleagues, all having a passion for art.

Since then, she has taken part in a few collective exhibitions mainly with the Pastel Society and the MSA.

This exhibition is a way of showing her love for the Palazzo through her art.

Ever since she can remember Maria’s greatest passion was art and creativity. But it was in her adulthood that she gave it her full focus. In 1997 Maria started to take her two children for art lessons at the Malta Society of Arts. She and her sister were the first two adult students of Mr Matthew Cassar.

A nurse by profession, she has managed to keep a weekly commitment ever since. She took part in various collective exhibitions at the Malta Society of Arts. She researched and explored different media and techniques, her favourite media being water colour, acrylic and pen and ink as well as experimenting with textures and collage.

Maria ‘s interest in this exhibition is the Palazzo’s architecture which has always fascinated and inspired her.

A dentist by profession, Yvette discovered art later in life and attended art classes at the Malta Society of Arts, under the guidance of Mr Matthew Cassar.

She has a fascination for colour, texture and light and enjoys exploring different media especially water colour. Her enthusiasm for art has been an inspiration to her daughters who also enjoy painting.  She has taken part in collective exhibitions.

Yvette is presently attending a weekly workshop at the MSA where, with her colleagues, she is participating in this exhibition with depictions of this beautiful Palazzo.

Marita studied art during her scholastic years under the guidance of artist Harry Alden and has obtained her O’ level in art.

A few years later she started attending art classes again at the Malta Society of Arts under the guidance of Mr. Matthew Cassar.

Marita enjoys using various media. Painting gives her a feeling of peace and relaxation. She attends an art workshop with a group of ladies weekly at the MSA.

She has taken part in various collective exhibitions in Malta and now exhibiting her work together with the group attending the weekly workshop.

Joanne started taking art lessons late in life at the Malta Society of Arts, under the guidance of Matthew Cassar. She also attends classes by artist Winston Hassall and is also a member of the Pastel Society.

Her passion is using different media. She has taken part in various exhibitions organised for students attending the Malta Society of Arts

At the moment, she attends weekly workshops at the Society with fellow artists. This exhibition is her way of appreciating the beauty of the Palazzo through art.

Fabiola Agius Anastasi, is a graduate in both Engineering and Art and Design. She is currently a contemporary painter and ceramicist with a passion for artistic experimentation, exploration as well as teaching.

Since her early childhood interest in art, she had achieved international painting awards. Fabiola has exhibited her artistic pieces in a number of exhibitions throughout her life. She considers art to be an expression of her interests, moods and outlook on life. Fabiola’s art is often inspired by the natural wonders that surround us, with several pieces being painted outdoors.

The Malta Society of Art is the place where she meets other artists, and enjoys painting in their company.

Loretta is a retired teacher and has always been interested in art, specialising in art during her College days. Later in life she attended several art classes and Art appreciation courses.

Nowadays she dedicates most of her free time painting and whenever possible tries to enjoy painting outside whilst enjoying the countryside.

Whilst attending the art workshop at the Society of Art, Loretta has been encouraged to take part in this exhibition as this Palazzo has many features and characteristics which can be brought out through visual art.

For Audrey, art is a beautiful way to release emotions, to lose herself in the magnificence of colours and media, to find renewed peace.

A holistic therapy teacher by profession, Audrey started attending art classes at a late age under the tuition of artist Marlene Gouder

Later she began to attend classes at the Malta Society of Arts under the guidance of Mr. Matthew Cassar.  She is currently attending weekly art workshops, with a group of artists with whom she is participating in this exhibition, these workshops also allowing the artists to socialize and share ideas.

She has exhibited paintings in various collective art exhibitions, however this exhibition is special to her as it reflects the admiration she has for Palazzo De La Salle

Elena is Bulgarian artist based in Malta.

In 1985, she graduated with a Master’s degree in engineering from the University of Mining and Geology, Sofia, Bulgaria and worked for a number of years in scientific research.

In France, 2003 she started her artistic journey with oils.

Moving to Malta in 2005 she further developed her skills in drawing and painting under the tuition of Anton Grech, Philip Agius and Matthew Cassar. In 2008, she joined the Society of Arts and participated in all members’ exhibitions organized annually by the Society.

Since 2012, Elena has taken part in numerous collective exhibitions both locally and abroad.

During the month of April 2017, a number of Toncheva’s paintings were shown in a collective exhibition “Nature, Women and Gold’’ at Palazzo De Piro, Mdina, along with other three Bulgarian artists.