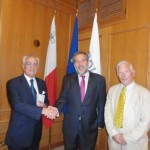 Middlesea Insurance is supporting the concert by Maltese violinist, Carmine Lauri which will be held at the Casino Maltese on October 16, 2012. The concert is being organised by the Malta Society of Arts, Manufactures and Commerce on the occasion of the 160th anniversary since it was established.

Carmine Lauri is one of the most established local musicians, having performed in the presence of various Heads of State including HM Queen Elizabeth II. He has also lead a number of Orchestras around the world including the Academy of St Martin in the Fields, the Orchestra of the Royal Opera House Covent Garden, the LPO, the LSO, the Orquesta Municipal of Venezuela and the Hong Kong Philharmonic Orchestra under LorinMaazel, Bernard Haitink, Sir Colin Davis, Antonio Pappano, Yan Pascal Tortellier, Riccardo Chailly, Pierre Boulez & Valery Gergiev. He regularly also coaches advanced students at the Royal Academy of Music and the Guildhall School of Music and Drama.

“We are very happy to support this concert and the Malta Society of Arts, Manufactures and Commerce on the occasion of their 160th anniversary. Carmine Lauri is a local artist who has become an international success and so we are sure that the concert is going to be a success,” said Mr Alfredo Munoz, President and CEO of Middlesea Insurance, during a presentation to the Malta Society of Arts, Manufactures and Commerce President, H.E.Judge Joseph A. Filletti and Hon. Treasurer, Mr Stephen Sant’Angelo held at Middlesea House Floriana.