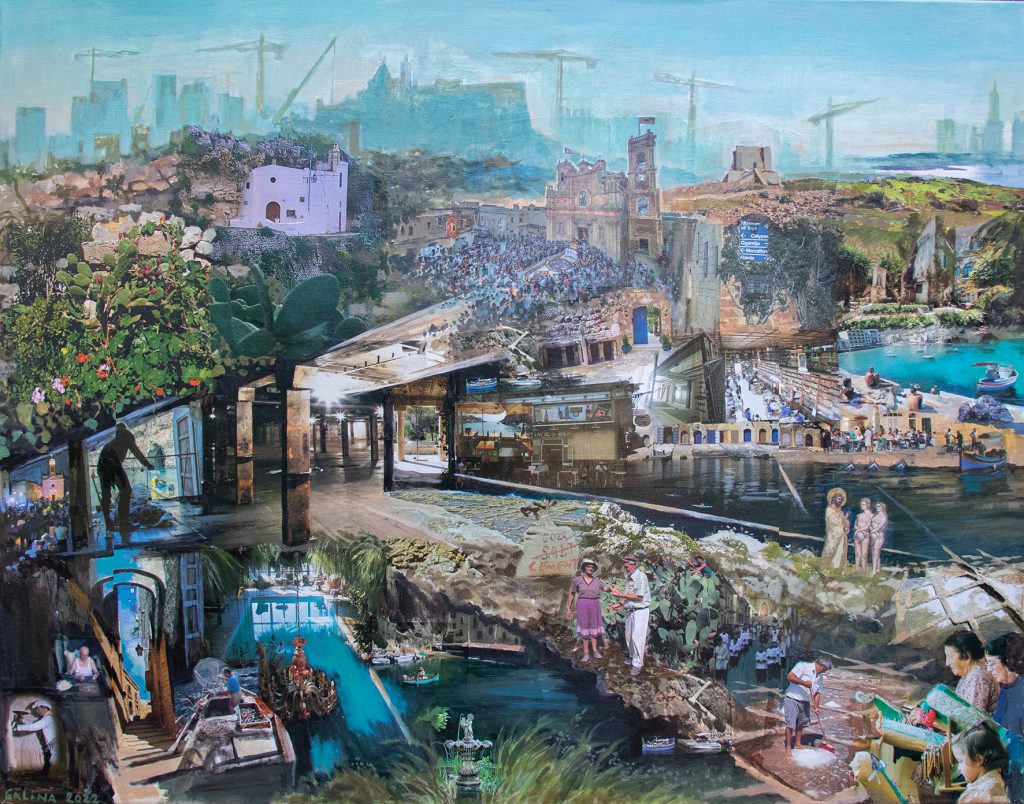 Summer Opening Hours:
Mondays and Fridays: 8am to 7pm
Tuesdays, Wednesdays and Thursdays: 8am to Noon and 4pm to 7pm
Saturdays: 8am to 1pm
Sunday & Public Holidays: Closed

This joint exhibition by Henry Alamango and Galina Troizky is a fusion of two themes: the social implications resulting from the functional transformation of rural and urban space over time, and a ‘crie de coeur’ reflecting a deep concern for an environment and populated space in progressive decline.

In 2015, the ‘civilised’ world rightly recoiled in horror at the deliberate physical and cultural destruction wrought by ISIS in the ancient city of Palmyra, Syria, of Unesco World Heritage fame. Ironically, flashbacks of Palmyra continue to manifest themselves in our spatial and cultural development, contributing also to solitary and anonymous lifestyles, loss of community, loneliness and pollution, to mention a few characteristics.
Are we also the perpetrators – or at least the acquiescent accomplices – to an ongoing ‘Palmyra’?

Henry Alamango is a self-taught artist who has forever loved to capture the love of nature that is etched in his upbringing.

Henry’s figurative art is rooted in a love of all things Mediterranean, with particularly strong impressions of the Maltese Islands. Warm Mediterranean light and stone, expressive sea and skies and an abundance of colourful paraphernalia are profusely represented in his paintings.

Water-based medium remains the artist’s preference. The difficulty in mastering this technique is rewarded by the atmospherics, the diffusion of light and the soft tones that convey a serenity throughout much of his landscape art. On the other hand, Henry is also committed to incorporating other media or using these selectively to better convey the character of the subject or theme being represented. Hence his experimentation with inks, acrylics, pastels and gesso: a useful flexibility that also supports his recent depiction of contemporary social street life.

Additionally, together with the artist fraternity in Malta and Gozo, Henry continues to participate in a number of collective exhibitions that dot the culture calendar.

Galina Troizky was born in Moscow where she graduated in applied art and fashion design in 1985. She subsequently lived and worked as an artist for several years in Berlin. Since 2001, Galina commuted between her homes in Berlin and in Gozo, where she settled in 2003, developing additional experiences in figurative art around the inspiring Gozitan landscape.

Apart from regular participation in a number of collective events in Malta as well as in Germany, New York, Zurich, Holland and Moscow, Galina has held solo exhibitions in Berlin, at the Ministry for Gozo, and at the National Museum of Fine Arts, Valletta.
Galina Troizky’s contemporary art collage is inspired by the tensions between the person and the rapid transformation of the urban environment. It is also a statement of the artist’s concern with the continuous dismemberment of the architectural environment, in a race for the newer, the bigger and better. The contradiction between abandoned dilapidation and modern glitz is now a sad characteristic of many cities.

“Troizky’s works are structured surreal landscapes that culturally relate to known situations or places but more often than not lack a definite recognisable identity of place and structure. They represent the fast-paced phenomena that govern our cities where the single individual can easily get lost in the nameless city crowd” – (Dr Sandro Debono, Senior Curator, Arts and Palaces)

“When I saw for the first time, the large-scale paintings of Galina Troizky, stylistically, they reminded me of the futuristic landscapes by the great early twentieth century artists Lyonel Feininger and Joseph Stella. The preoccupation with space and the vitality and throb of modern city life is strongly felt in many works of the moderns… the artist is preoccupied with the contemporary dichotomies of a turbulent physical world.” – (Dr Louis Lagana, University of Malta)