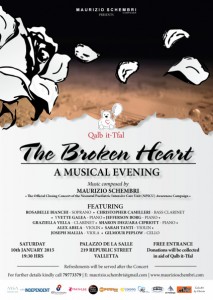 The aim of this campaign is to create awareness amongst the general public about the invaluable work done by the professional, caring and dedicated team at the Neonatal Paediatric Intensive Care Unit (NPICU) formerly known as the Special Care Baby Unit (SCBU) at Mater Dei Hospital, Malta.
It will hopefully bring light upon the struggles and needs of babies in intensive care and the physical and emotional experiences of parents and families whose babies need special care. Such campaign will also hopefully serve to give sufficient knowledge and courage to parents who will be in need of the NPICU services in the future.
The campaign will come to an end with “The Broken Heart – A Musical Evening, music composed by Maurizio Schembri, as the Official Closing Concert on Saturday 10th January 2015 at Palazzo de La Salle, Valletta at 19:30hrs. The entrance for this concert is free of charge. Donations in aid of Qalb it-Tfal will be collected.
For further details kindly visit: www.maurizioschembri.com