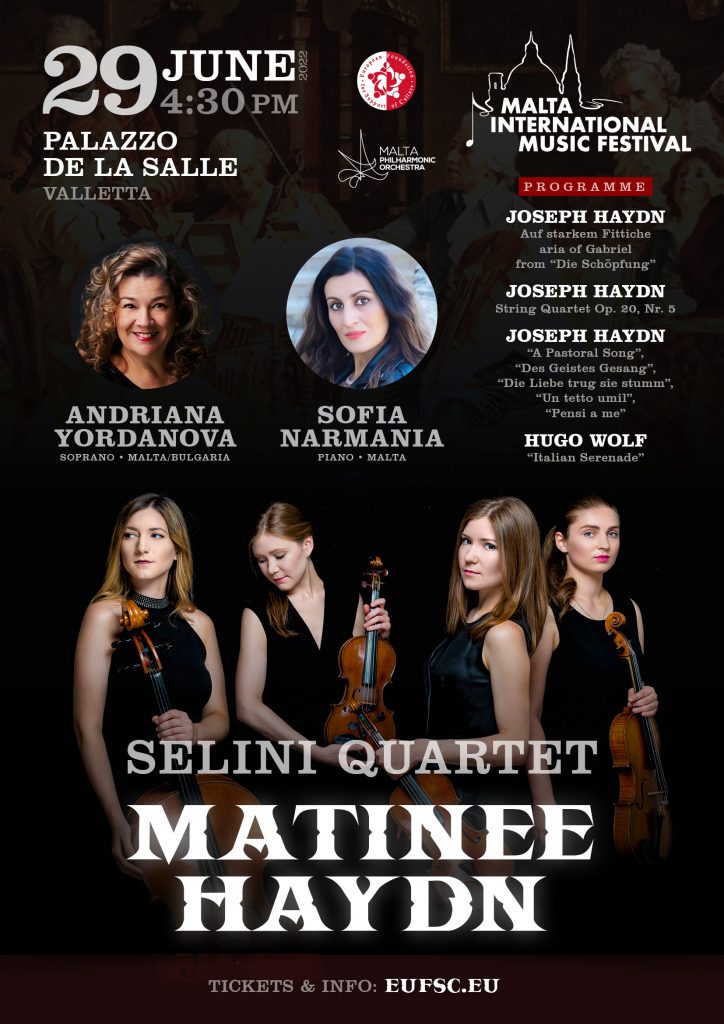 As part of the Malta International Music Festival 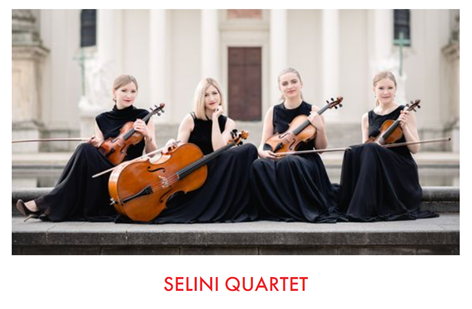 Inspired by the Greek Mythology, Selini Quartet borrows its name from the Goddess Selini, the Goddess of the moon. The semicircle-shape of the string quartet reminds us of the one of the Quarter Moon, where each member of our quartet symbolizes one of the four moon phases. Coming from Russia, Romania and Greece, the four musicians met in Vienna, where they formed the Selini Quartet in 2017. Since then, thanks to their commitment to the score, combined with their powerful sound and wide range of emotions, they have been performing around Europe and have won prestigious awards. All these have now led the Selini Quartet to be selected to represent Austria’s music scene across the world, through the “NASOM-New Austrian Sound Of Music” program, for the seasons 2020-2022. They have been invited to perform in some of Vienna’s major concert venues such as the Wiener Musikverein, Vienna Konzerthaus, Schuberthaus, Beethoven Museum, Beethovenhaus Baden, ORF RadioKulturhaus, MuTh, Pölz Halle Amstetten, Burgtheater, Hofburg. Abroad, they have appeared in countries like Germany, Greece, France, Italy, Norway, Switzerland, the Czech Republic, Poland, Portugal, Romania, Croatia, the UK and Belgium. Their performances have included appearances at the “Istanbul Music Festival”, “Steirisches Kammermusikfestival” in Graz, at the “Kalkalpen Kammermusikfestival” in Grossraming, at the “Aegina International Music Festival” in Greece, at the “Harmos Festival” in Portugal, at the “Prague Clarinet Days“ Festival, at the “Classix Festival ” in Romania, at the “Art Novi Festival” in Croatia, at the “Festspillene Helgeland” in Norway, “Capraia Music Festival” in Italy and more.

In 2019 the ensemble was admitted to the ECMA – European Chamber Music Academy, where it is supervised by some of the world’s leading chamber music specialists and given the opportunity to perform at major concert halls and festivals in Europe. Further invitations followed to “Le Dimore del Quartetto”, Chamber Music Residency program of “Festival d’Aix en Provence” and Musethica. In the same year the quartet was invited to teach at the Toppen International Summer Academy (Norway).

With the guidance of Johannes Meissl (Artis Quartett), they have been working since their formation, on developing the deepest understanding of music.

Upcoming projects include among other performances in concert halls such as Wiener Musikverein, “Pfarrsaal” Zell am See, and “Kunsthaus” Horn.