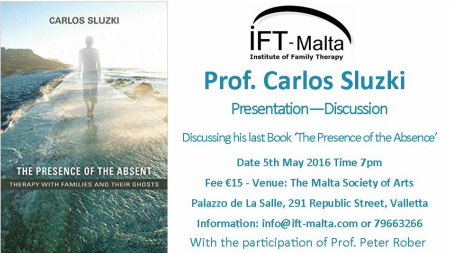 Carlos E. Sluzki was born in Buenos Aires, Argentina, where he completed his M.D. training at the University of Buenos Aires School of Medicine, and his psychoanalytic training at the Argentine Psychoanalytic Association Institute of Psychoanalysis. He was a core member of the team that developed the pioneering Department of Psychiatry and Psychiatric Residency Program at the Gregorio Araoz Alfaro Hospital, Lanus, Argentina.

He also trained in couple and family therapy at the Mental Research Institute (MRI), Palo Alto, California during the early days of that discipline.

Prof. Sluzki has been Editor-in-Chief of the journals Acta Psiquiatrica y Psicologica de America Latina, Family Process, and the American Journal of Orthopsychiatry, and Vice-President of the American Family Therapy Academy, and is a Distinguished Fellow of the American Psychiatric Association and of the American College of Psychiatrists, as well as honorary member of multiple professional organizations worldwide.

He has published extensively, and has delivered countless keynote and panel presentations, conducting workshops worldwide, with special emphasis on couple and family therapy, social networks, violence and victimization, refugees and human rights.

During the event which is being organised by the Institute of Family Therapy – Malta, Prof. Sluzki will be discussing his latest book called ‘The Presence of the Absence’, with the participation of Prof. Peter Rober. Prof. Rober will be in Malta on the invitation of IFT-Malta, to present a seminar on ‘The Complexity of Therapeutic Listening’.

Further information may be obtained from www.ift-malta.com