If it’s true that “without deviation from the norm progress is not possible”, it’s also true that the well- known Zappa quotation continues: “In order for one to deviate successfully, one has to have at least a passing acquaintance with whatever norm one expects to deviate from.”

Frank Zappa had an extraordinary knowledge of this “norm”: submitting any musical materials, ideas or intuitions to a constant discipline, he creates an impressive corpus of “compositions”; not only musical compositions but also many other different disciplines and creative communication forms.

“Planet of Prunes” – a new project by 2 x Z Duet is about that kaleidoscopic repertoire of Zappa. Under its funny and explosive surface is hidden a mind-blowing compositive organization, a perfect laboratory of complexity which to this day remains new universe to discover.

From the early ironic songs of the 60’s to the intricate rhythmic lines of the 70’s, from the more recent works to the rare original version scores, 2 x Z Duet, with a “mixed –media” show of songs, dance, solo piano music and non-sense theatre, will celebrate one of the most original composers and “creative organizers” of our time. 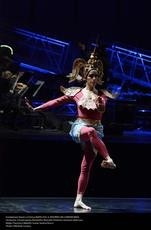 Born in Venice, Alba dal Collo started studying the piano under Giorgio Vianello at the Conservatory “Benedetto Marcello” in her native city at the age of sixteen. She graduated there in 2008 under the guidance of Anna Colonna Romano. In the course of her studies, Alba participated in several master classes with international musicians, including Pier Narciso Masi, whose courses in piano and chamber music she attended at the academies of Florence and Fusignano.

During the summers of 2010 and 2011 she took part in piano and chamber music courses in Reichenau (Austria) of the ISA (Internationale Sommerakademie), organized by the University of Music and Arts in Vienna. From 2008 to 2011 she attended the composition class of Riccardo Vaglini at the Conservatory of Venice.
As a singer and dancer, she has been collaborating with the composer Giovanni Mancuso since 2016. She performed in his operas Il Ritorno dei Chironomidi at the Malibran Theatre in Venice and in Atlas 101 at the Mario del Monaco Theatre in Treviso. Furthermore, she performed in concerts dedicated to the music of Frank Zappa at the Vedova Foundation and at the Conservatory of Venice.
In March 2018 she performed the première of Giovanni Mancuso’s Tastieren, a concert for four pianists playing 20 different kinds of keyboards, in the Pollini Auditorium in Padua.
In 2019, in collaboration with Giovanni Mancuso, she releases the album “Planet of prunes” on Galatina records, a cd of music by Frank Zappa for voice and piano. 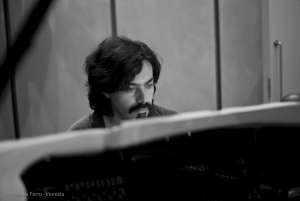 Born in Venice in 1970. He studied piano under the guidance of Wally Rizzardo at Conservatorio “Benedetto Marcello ” of Venice where he graduated in 1992 with a first class honour degree.

He studied at the “Corsi di perfezionamento in musica da camera at the Accademia – Incontri col Maestro” in Imola with Dario De Rosa, Maureen Jones and Pier Narciso Masi (first class honour degree) and the Scuola Civica di Milano with Renato Rivolta, at the Corsi Internazionali di Composizione di Città di Castello (1990 and 1991), and at the Accademia Filarmonica di Bologna (1991/92) under the guidance of Salvatore Sciarrino.

He teaches music theory, composition and improvisation at Conservatorio “B.Marcello” of Venice.