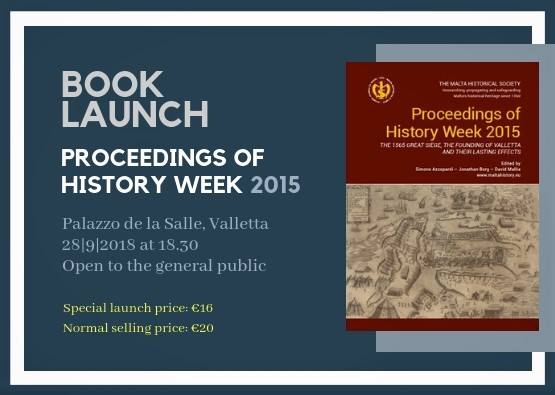 Hosted by The Malta Historical Society

Summer’s almost over, and the Malta Historical Society is back with more events. On 28 September 2018 at 18:30, at Palazzo de la Salle, Valletta, we are launching the book ‘Proceedings of History Week 2015, The 1565 Great Siege, the Founding of Valletta and their Lasting Effects.’

History Week 2015 was held in partnership with the Department of History, University of Malta, the Embassy of Spain in Malta and MASMOM with the support of the Janatha Stubbs Foundation, The ARDC Trust, and Heritage Malta. The Proceedings of History Week is part-funded by the Malta Book Fund 2015 of The National Book Council.

Join us because it’s fun, but also to benefit from a price offer of €16 for launch purchases instead of the normal selling price of €20. See you at Palazzo de La Salle!