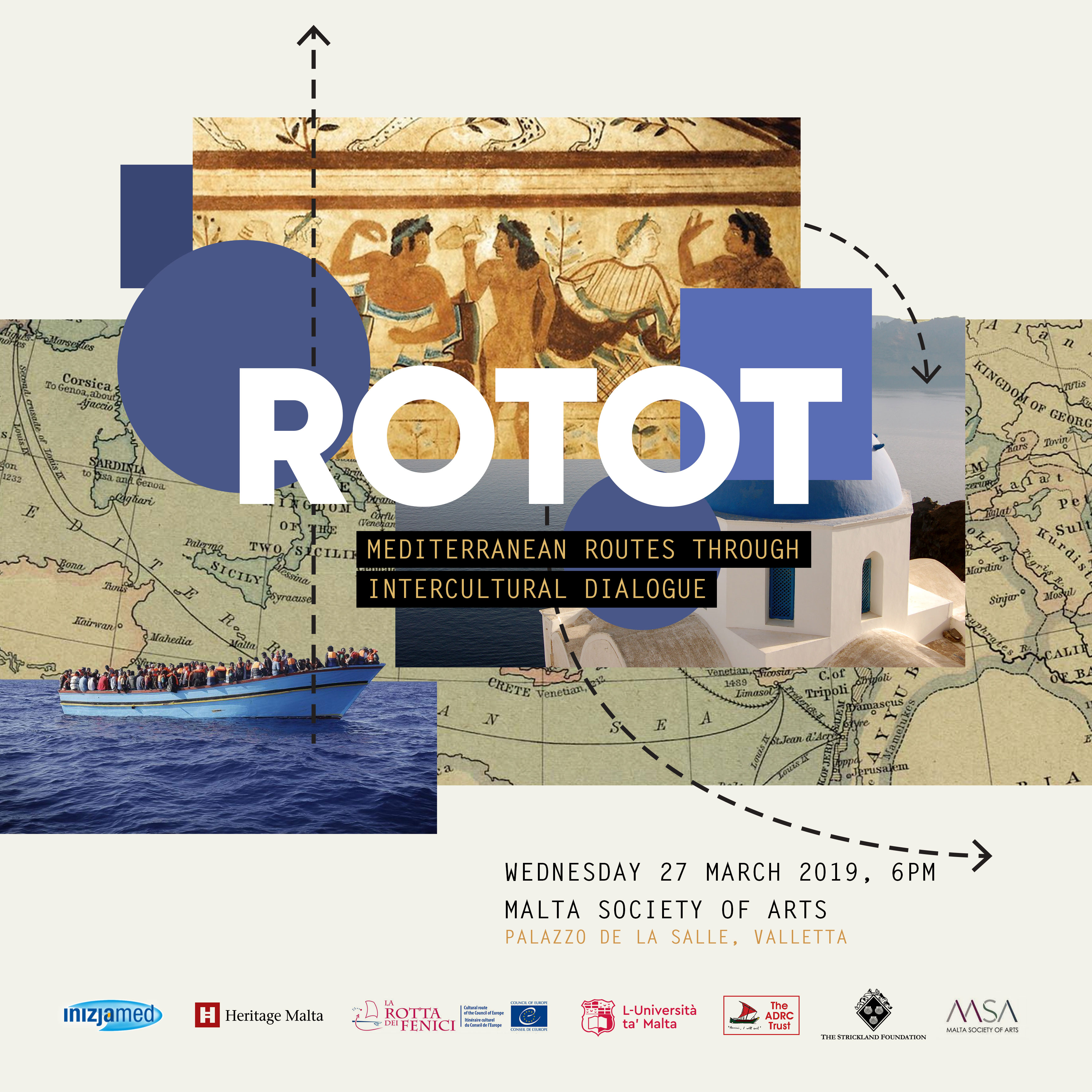 An international debate about how different local realities meet to reflect wider and common Mediterranean realities that inter-relate with one another by Inizjamed.

Entry is free of charge. Proceedings will be in English.

This seminar is organised by Inizjamed and addresses how different local realities can be brought together to reflect a wider, more common Mediterranean reality, or set of realities, that inter-relate with one another. The aspect of the Phoenicians being a sort of mythical, legendary archetype of common Mediterranean roots that however still inspires many cultural operators in seeking exchange through intercultural dialogue, as opposed to neocolonial and neoliberal economic measures, will provide us with a framework to which all of our speakers can relate to – this is so because in some way or another they either address this aspect through their work, or in a way act as contemporary Phoenicians, so to speak.

With Mario Gerada chairing, Dr Antonio Barone (La Rotta dei Fenici – Itinerario Culturale del Consiglio d’Europa, Salinunte, Sicily), Prof Osama Hamdan, Jericho Mosaic Centre) and Noureddine Ezarraf (engaged artist from Casablanca). The event is supported by the Centre for the Study and Practice of Conflict Resolution, the Department of International Relations, The Department of Maltese and the Institute for Tourism, Travel and Culture at the University of Malta, Heritage Malta, the ADRC Trust and the Strickland Foundation.

Dr Antonio Barone is an expert in cultural and rural tourism. Since 2003 he has directed the Phoenicians’ Route, an International Cultural Route of Mediterranean Intercultural Dialogue that belongs to the Council of Europe Cultural Routes Program. He is a member of the UNWTO Core Working Group on the Phoenicians’ Route. The Route is active in many Mediterranean countries. He has worked in many territorial marketing projects at international level addressing sustainable tourism and local development. He cooperates with universities, development agencies, DMOs, DMCs and international organisations including ICOM and the OECD.

Dr Rachid Chamoun has been the Director of the School of Architecture and Design and the Chair of the Department of Architecture at the Lebanese American University. He is the Founding Director of the Urban Planning Institute and the current Director of the LAU- Louis Cardahi Foundation. He is also President of the Confederation of the Phoenicians’ Route. He is an active Board Member of the World Association for the Protection of Tangible and Intangible Cultural Heritage in times of armed conflicts, WATCH. His approach to research is built on a sustainable framework towards promoting and strengthening civil peace and human rights in the world community. His current network extends to the global community, encompassing a broad spectrum of scientists, planners, architects, political scientists and other scholars with original views on interdisciplinary education.

Noureddine Ezarraf is a multidisciplinary artist who works between Aghmat and Marrakech in Morocco. He studied economics and management and went on to develop a cultural action platform addressing rural realities. In his art he deals with memory and archives as political subjects. He experiments with different forms of intervention and artistic participation. He has carried out artistic research at Matadero Madrid addressing gender politics and regimes of visibility between Morocco and Spain, reflected on the Arab Spring in the north of Morocco and exhibited his work at the Halles de Schaerbeek in Brussels and London. He has just finished addressing the fiction of urban space at a residence at the Atelier de l’Observatoire pour le Musée Collectif in Casablanca.

Mario Gerada has a degree in social work and worked in the fields of child protection and drug addiction. He worked in the fields of development and migration focusing on policy analysis, campaigning and project coordination in a range of areas including Aidwatch, Development Education and refugee rights. He has carried out work for the Ministry for the Family and Social Solidarity focusing on work in relation to separated and unaccompanied children. Mario also carried out work for the President’s Foundation for the Wellbeing of Society in relation to international affairs and environmental issues. He presently Chairs the National Hub for Ethnobotanical Research. Mario works full-time at JRS Malta. He has a Master in Christian Spirituality from the University of Malta and is one of the founding members of the Maltese Catholic/Christian groups Drachma LGBTI and Drachma Parents’ group.

Architect Osama Hamdan specialised in cultural heritage conservation and has directed several conservation projects in Palestine, Jordan and Syria. Arch. Hamdan is Director of the Palestinian NGO Mosaic Centre and has carried out various awareness activities in cultural heritage protection. He was the National Coordinator of the EuroMed project “Byzantium-Early Islamic” and the Head of the Palestinian team in the Euro-Med Research Project “An Integrated Approach to Archaeological Sites”. More recently he lectured on Conservation and Restoration at the Higher Institute of Islamic Archaeology at the Al-Quds University in Palestine.