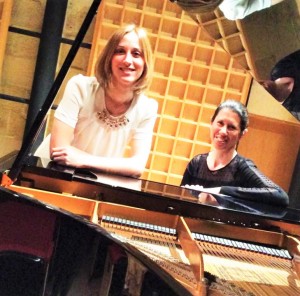 “The two musicians increasingly gave an excellent account of themselves in all sections of this continuous musical journey.” (The Sunday Times)

Tales and Dances is a Four-Hand Piano Concert at Palazzo de La Salle by the Grima-Gialanze Duo.

We do hope you are still able to join us in an evening of original works for piano four-hands as well as arrangements that sum up the great joy of piano-duet performance. The 60-minute programme includes some much-loved repertoire by Faure, Khachaturian, Ravel, Rachmaninoff & Falla.

Tickets at 10Euro will be available on the night and doors will open at 7:30pm.

Entrance for children from 6 years of age is FREE​

Maltese Pianists Gisèle Grima and Erika Gialanze` have been collaborating since 2013 when a realisation of sharing music became an enthusiastic and bold commitment. As one of Malta’s sole existing piano collaborations of their generation, the duo has already been in demand to perform in various venues around the island. In 2014, the Grima-Gialanze` Duo made their first public appearance in a performance at St. James Cavalier, Valletta and their immediate musical chemistry led to an invitation to appear as guest artists at the Three Palaces Festival. In 2015, they were invited to perform at the International Spring Orchestra Festival and the Victoria International Arts Festival, Gozo where they premiered works by local composers Albert Pace and Alexander Vella Gregory respectively. It is the genuine love of music-making that has brought these two musicians together and they are willing to keep the duo alive through recitals and educational projects.

As solo pianists, both have had an extensive experience performing locally and abroad. Erika Gialanze` holds an LRSM and majored in performance at the University of Malta studying with Mro. Michael Laus. In 2007 she graduated with a Master of Music in Piano Performance and was furthermore invited to perform in Berlin. Gisèle Grima pursued her studies in the UK with Nicholas Ashton and Paul Roberts. She is a graduate of the Ian

Tomlin Academy of Music, Napier University, Edinburgh and the Royal Northern College of Music, Manchester. She holds a MMus (perf.) from the RNCM and an FRSM.  Both Grima and Gialanze` are active as pianists, accompanists and music educators.