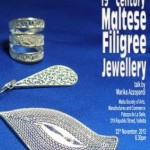 The Malta Society of Arts, Manufactures & Commerce is holding a talk on 19th Century Maltese Filigree Jewellery.
The talk is being delivered by Marika Azzopardi BA (Hons), AJP, who will delve into the different aspects of filigree jewellery, Malta in the 19th Century and what led to Maltese Filigree acquiring such a strong placing amongst other Mediterranean and European jewellery forms.

Marika Azzopardi is a well-known and prolific journalist, writer, art reviewer and blogger as well as being a qualified Art Historian who has carried out an in-depth research into the topic of Maltese Filigree Jewellery, the first of its kind in Malta. She has researched Maltese Filigree Jewellery in several Maltese Museums and private collections as well as at London’s Victoria & Albert Museum, amongst others. Mrs Azzopardi organised a filigree exhibition at Palazzo Castellania, Valletta in 2009.

Entrance is free an everyone is invited.

The talk will be delivered in the Maltese language.