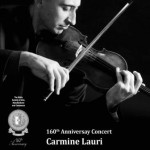 Carmine Lauri was born in 1971 and started playing the violin at the age of four later studying with Mario Bisazza. In 1988 he was awarded the Associated Board scholarship to further his studies in London at the Royal Academy of Music with Jean Harvey, Maurice Hasson and other distinguished artists including Anne Sophie Mutter & Ida Haendel.

Lauri has performed extensively and on a number of occasions he was selected to perform as a soloist in the presence of HM Queen Elizabeth II and other Heads of State. His two premiere performances of the Walton violin concerto with the Czech State Philharmonic Orchestra of Brno further enhanced his growing international reputation. As a representative of the London Symphony Orchestra, of which he is the Co-Leader, Carmine leads and performs regularly with the World Orchestra for Peace under Valery Gergiev. Since October 2010, Carmine has also been appointed as Concertmaster of the Oxford Philomusica.

Carmine Lauri has two solo compact disc recordings to his credit, Bravura (1994) and Violin Extravaganza (2004).  He has also recorded the entire 2005-2007 violin syllabus of the Associated Board of the Royal Schools of Music.

Lauri has led various orchestras including the Academy of St Martin in the Fields, the Orchestra of the Royal Opera House Covent Garden, the LPO, the LSO, the Orquesta Municipal of Venezuela and the Hong Kong Philharmonic Orchestra under Lorin Maazel, Bernard Haitink, Sir Colin Davis, Antonio Pappano, Yan Pascal Tortellier, Riccardo Chailly, Pierre Boulez & Valery Gergiev.
Carmine has also recorded with the LSO music scores of several movies, including  Star Wars, Harry Potter, & The Queen (just to name a few)  and is often the featured violin soloist in many films such as ‘As you like it’ and ‘Joyeux Nöel’.

In December 2004 Lauri made his debut at the Birmingham Symphony Hall in Tchaikovsky’s Violin Concerto & in 2005 made his debuts with the LSO in a world premiere concerto by Huw Watkins and with the LPO playing the Bruch Concerto. Other performances included the Beethoven Triple and Brahms Double Concertos with the Malta Philharmonic and Orchestra di Pesaro, Italy. In July 2006, Carmine made his debut with the Municipal Orchestra of Venezuela where he was the soloist in Wieniawski’s Violin Concerto No.2. In July 2007 he performed the Brahms Double concerto with the LSO conducted by Daniel Harding in the USA and in September 2007 made his debut with the Czech Philharmonic Orchestra. In October 2007 Carmine premiered the Violin Concerto ‘Rosalind’ by Harry Potter composer Patrick Doyle in a performance at the Royal Albert Hall in London with the LSO. 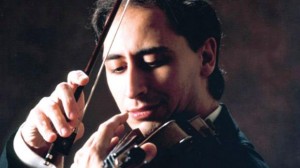 Carmine is regularly invited to judge final rounds of music competitions held in London and to coach advanced students at the Royal Academy of Music and the Guildhall School of Music and Drama.

In 2004 and 2006 respectively, Carmine was elected as Associate of the Royal Academy of Music (ARAM) and Fellow of the Royal Academy (FRAM) for his achievements in his career. Carmine currently plays a violin by Nicholas Lupot made in ca 1780.Recently Carmine’s distinguished talents were acknowledged by his country which bestowed upon him the National Order of Merit – M.O.M. (F’Ġieh ir-Repubblika).

Carmine has been guest leading a number of orchestras including the London Philharmonic, the Rotterdam Philharmonic & the Manchester Camerata, and recently invited to lead the Bournemouth Symphony Orchestra, just to name a few. Recent performances have included the Dvorak Violin Concerto and Wieniawski’s 1st Violin Concerto with the Malta Philharmonic, a number of solo performances accompanied by the London Symphony Orchestra including the Paganini Moto Perpetuo and Sarasate’s Introduction and Tarantella in Florida USA,  the solos from the film “Schindler’s List” by John Williams in an all film music concert at the Philharmonie in Cologne, a Duo performance of Monti’s Czardas with the world famous Roby Lakatos and his gypsy band at the Barbican Centre in London and a solo performance in honour of Sir Colin Davis in the presence of H.M Queen Elizabeth II in London.

Other solo engagements included a performance of the Debussy Violin Sonata accompanied on the piano by the principal conductor of the San Francisco Symphony Orchestra, Michael Tilson Thomas, and performances of the Beethoven Triple Concerto, Vivaldi Four Seasons and Bottesini’s Gran Duo with the Oxford Philomusica.

In November 2012, Carmine will be the soloist in a concert with the Malta Philharmonic at the Manoel Theatre and in January 2013 he will perform Wieniawski’s Violin Concerto No.1 with the Oxford Philomusica and will return to Malta for two duo concerto performances with Emanuela Buta and the Malta Philharmonic Orchestra performing Vivaldi’s Four Seasons and Bach’s Double Concerto.