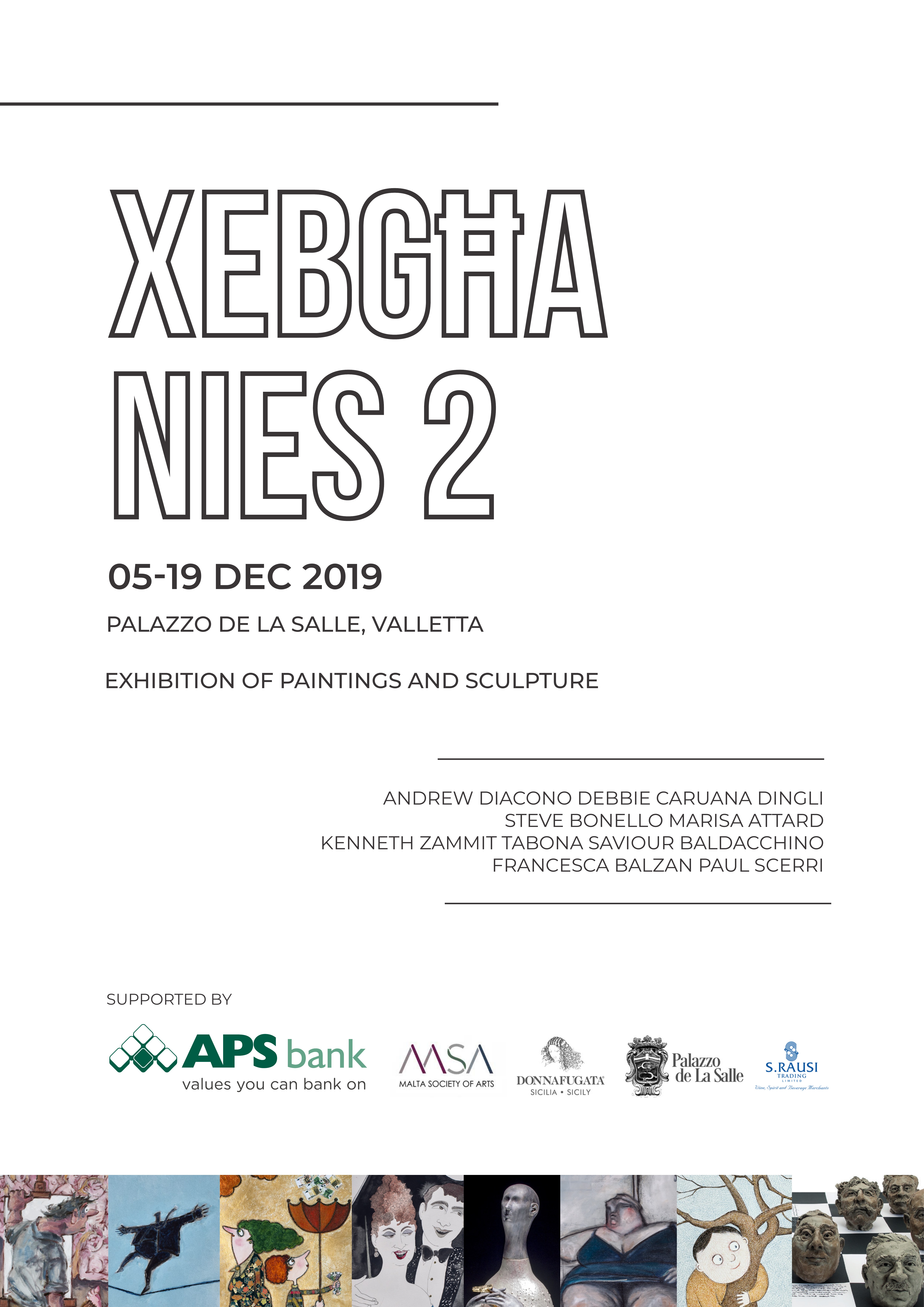 Exhibition of Paintings and Sculpture

Opening hours
Monday to Friday – 8am to 7pm
Saturday – 9am to 1.30pm
Sundays and Public Holidays closed

Xebgħa Nies 2 – The Human Clay is the second collective exhibition for a group of established artists who share a predisposition to draw, sculpt and paint the human figure. The participating artists include Paul Scerri, Debbie Caruana Dingli, Kenneth Zammit Tabona, Steve Bonello, Francesca Balzan, Saviour Baldacchino, Marisa Attard and Andrew Diacono. The group is linked by friendship and past collaboration and remains committed to looking at people as an inspiration for their work. Loosely translated from the Maltese as ‘plenty of people’, the phrase Xebgħa Nies is both a personal reference as well as to the men and women who appear in their works of art.

Baldacchino was born in 1980. He considers himself a self-taught artist who has always nurtured a great interest in the arts. He first exhibited his paintings in 2003, has had two solo exhibitions and has taken part in several collective exhibitions. He has experimented with many styles in both the figurative and abstract idioms which include pop-art and the grotesque. The grotesque figures depicted by the artist are deceptively simple, linear and brute yet carefully thought out. Personal experiences and thoughts are reflected in most of the quasi-human subjects tackled by Baldacchino, who is always striving to challenge the viewer through dialogue.

Zammit Tabona was born in 1956 and educated at St Aloysius College. He worked for Barclays Bank, Mid-Med Bank and HSBC Bank from 1973 to 2001 in various managerial roles including Head of Business Development, Public Relations, Advertising and Customer Service. He reviewed music and theatre for the Times of Malta and the Sunday Times of Malta from 1975- 2010, served on the Manoel Theatre management Committee from 1989- 1996, Hon Secretary 1998-2004 and Deputy Chairman from 2010 -2015. In 2015 he was appointed artistic director of the theatre. He is the founder and artistic director of the Valletta International Baroque Festival. He is also an established watercolourist with many exhibitions under his belt and his paintings are found in prestigious collections both in Malta and overseas including Berleymont in Bruxelles. His style is instantly recognizable style and the strong colours and distinctive shapes he employs epitomise the beauty of Malta whether through its landscape, urbanscape or interiors.

Bonello is a freelance artist, cartoonist and illustrator. In his previous working life he was employed in the aviation business for thirty years and after that in commuter transport. He has held two solo exhibitions in 1988 and 1991 respectively and exhibited work in various exhibitions in Malta and overseas. He has contributed cartoons for the Sunday Times of Malta since 1991. In 2018 Steve co-authored No Man’s Land with Marie Briguglio – a quirky but well-researched saga of Malta’s environmental history in the last thirty years and containing over 200 of Bonello’s cartoons on the subject. He has also been published in a number of local magazines and in 2015 he was invited by Cartooning for Peace to exhibit at the European Parliament in Strasbourg.

Francesca Balzan is an art historian, author and practicing artist. In recent years she has specialized in the research and publication of the history of jewellery in Malta and has published a book entitled Jewellery in Malta: Treasures from the Island of the Knights (1530-1798). She has worked as a curator at Palazzo Falson Historic House Museum in Mdina while secretly working away at her sculptures in clay. She has curated a number of exhibitions in an independent capacity including a BOV retrospective of Debbie Caruana Dingli’s paintings in 2015. This exhibition will be a first showing of her more recent work in sculpture and will focus almost exclusively on quirky portraits of Maltese men.

Diacono was born in 1958 into a family of talented artists and sculptors and he has been active on the art scene since his early childhood. His father, Victor Diacono, who he cites as a seminal influence on his work, was a well known sculpturor and watercolourist and although Andrew is considered to be a primarily a sculptor, he also paints. Diacono has participated in numerous collaborative exhibitions both in Malta and overseas and has had two solo exhibitions at the Museum of Fine Arts and at the Casino Maltese in Valletta. He has also exhibited three times with Debbie Caruana Dingli. Diacono is an instinctive artist who is drawn to the human figure in all shapes and sizes. As a man of few words he prefers to let his work speak for him.

Marisa Attard (b.1958) is an artist and illustrator. She studied art under Esprit Barthet, Harry Alden and Anton Calleja. She has illustrated numerous books and has twice been awarded the Premju Nazzjonali tal-Ktieb for Best Illustrator of Children’s books. Marisa has taken part in both solo and collective art exhibitions where her work has been positively reviewed. Marisa is a keen observer of people and frequently uses her art to highlight the human condition and the political and social reality. In her paintings, she enjoys combining her illustrative style of pen, ink and watercolour to works in acrylic and collage. She shows a preference for bright colours applied in layers with added collage and found objects to help create texture and depth. Her range of subjects can be both serious and dark or humorous, quirky and endearing.

Born in 1962, Caruana Dingli represents the fourth generation of artists in her family. She graduated from the Government School of Art in 1980 and holds a UK diploma in cartooning. She is an established portrait artist and works in both watercolours and oils. Her first solo exhibition took place in 1985 and there have been various others along the way including three collaborations with Andrew Diacono. In 2015 Bank of Valletta held a major retrospective of her work. In 2016 Caruana Dingli was involved in a traffic accident which left her unable to paint with her right hand. As a result she painted a series of introspective self-portraits with her left which were exhibited in 2017 in a solo exhibition entitled Facing Myself. The artist has a natural disposition to speak out against perceived injustices and her awareness of social and environmental issues are best reflected in her cartoon paintings.

Born in 1959, Scerri studied at the Government School of Art, Accademia Belle Arte Pietro Vanucci, Perugia and the Istituto Statale D’Arte G. Ballardini, Faenza. He spent four years teaching Ceramics at the former Art and Design Centre in Valletta and moved on to gain further experience in the manufacture of industrial ceramics within the private sector. He gained professional experience from attending various seminars in Italy and Spain. He is a visiting lecturer at the University of Malta within the Faculty of Education. His expression in art has evolved through the years. Most of his work is the result of personal experience and people he has encountered. He depicts stereotypical characters with subtle notions of injustice and narcissism while leaving his sculptures free to individual interpretation.