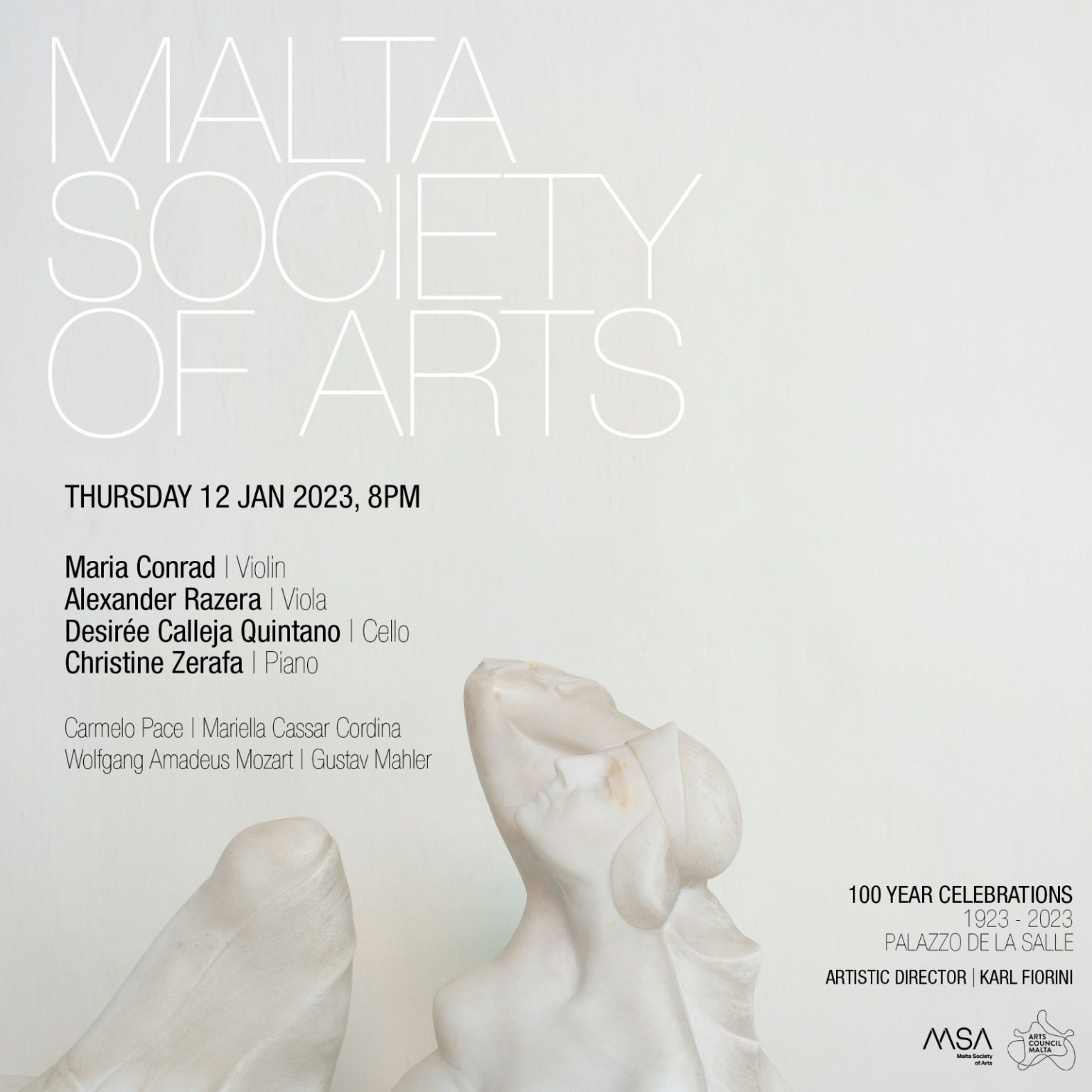 Malta’s finest musicians will be joining forces to celebrate the Malta Society of Arts’ 100 years at Palazzo de La Salle with a series of monthly concerts and masterclasses.

Compositions from the MSA’s music archive and music by past composers affiliated with the MSA will be brought to life by Christine Zerafa, Dominic Galea, Charlene Farrugia, Carlo Muscat, Philip Attard and many more. In addition, this Maltese musical cultural heritage will be flanked by commissioned compositions by contemporary composers.

In this first concert, Christine Zerafa’s piano quartet will perform Carmelo Pace’s Conversazioni, Mariella Cassar Cordina’s new commission as part of the celebrations and other works.

The concert series is supported by Arts Council Malta under the Programme Support Scheme.

Maltese pianist Christine Zerafa has appeared as a soloist and chamber musician in various concert series and festivals in Europe and the United States. Performances have taken her to major world-renowned venues and festivals including the Royal Festival Hall, Wigmore Hall, Queen Elizabeth Hall, St John’s Smith Square, Cadogan Hall, St Martin in the Fields and St James Piccadilly, amongst others. She has performed in Oxford Lieder Festival and appeared on BBC Radio 3 as well as BBC television.

Christine has been recipient of various awards including first prize in the Malta National Bice Mizzi Competition, the Royal Northern College of Music Clifton Helliwell Memorial Prize, the Royal Academy of Music Scott Huxley prize for accompaniment and the Schumann Lieder pianist prize. She was also awarded the Eric Brough Memorial Award and the John B McEwen Prize for good work, conduct, and achievement during her studies at the Royal Academy of Music. She is a Park Lane Group Artist and she was also an award winner on the Tunnell Trust Artist Scheme.

Christine gained a Master of Music in solo performance from the Royal Northern College of Music where she studied with Norma Fisher and Paul Janes, after which she moved on to study with Andrea Lucchesini at the Scuola di Musica di Fiesole in Florence. Having a great passion for collaboration with singers and instrumentalists, she then read for a Master of Music degree in piano accompaniment, which she completed with distinction at the Royal Academy of Music under the tuition of Michael Dussek, Malcolm Martineau and Ian Brown. She recently obtained a PhD at the Academy, which focused on the role of the pianist in the art of song and duo chamber music.

Christine is an ABRSM examiner and she has most recently been appointed as Senior Research Officer at the Malta College of Arts, Science and Technology, where she drives and inspires research activity in the Institute for the Creative Arts. She is also a piano tutor and collaborative pianist at the Malta School of Music.