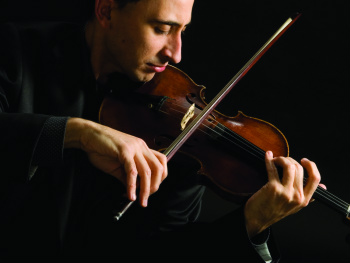 Carmine Lauri has been awarded with the Malta Society of Arts’ 2015 Gold Medal in recognition for his outstanding internationl career. The presentation will be held at the premises of the MSA, Palazzo de La Salle, on the 23rd March 2016 under the patronage of H.E. Marie Louise Coleiro Preca, President of Malta.

A Biographical Outline
Carmine Lauri was born in 1971 and started playing the violin at the age of four.In 1988 he was awarded the Associated Board scholarship to further his studies in London at the Royal Academy of Music with Maurice Hasson and other distinguished artists including Anne Sophie Mutter & Ida Haendel.

Lauri has performed extensively worldwide including performances in the presence of HM Queen Elizabeth II and other Heads of State. Since the year 2000 he has beeen Co-Leader of the Concertmaster of the Oxford Philharmonic and Guest Leader of the Malta Philharmonic Orchestra. He has also been guest concertmaster of various orchestras including the Academy of St Martin in the Fields, the Orchestra of the Royal Opera House Covent Garden, the London Philharmonic, the Rotterdam Philharmonic, the Bournemouth Symphony, Manchester Camerata and the Hong Kong Philharmonic Orchestra under distinguished conductors such as Lorin Maazel, Bernard Haitink, Sir Colin Davis, Sir Antonio Pappano, Riccardo Chailly, Pierre Boulez, Valery Gergiev and many others.

Carmine regularly leads the London Symphony Orchestra and has led the orchestra in numerous recordings including music scores of several movies, including Star Wars, Harry Potter, The Queen, The Danish Girl, Suffragetteand is often the featured violin soloist in many films such as ‘As you like it’ and ‘Joyeux Nöel’

Throughout his career Carmine has performed concertos with many international orchestras including the LSO, LPO, the Czech Philharmonic and Czech State Phil of Brno, the Oxford Philharmonic, the Orquesta Municipal de Caracas, and the Malta Philharmonic Orchestra. He has also premiered two violin concertos with the LSO. Carmine is regularly invited to judge final rounds of music competitions held in London and to coach advanced students at the Royal Academy of Music and the Guildhall School of Music and Drama. He also regularly coaches students at the Royal Academy of Music as part of their orchestral training and conducts sectional string rehearsals to prepare the orchestra for their concerts.

In 2004 and 2006 respectively, Carmine was elected as Associate of the Royal Academy of Music (ARAM) and Fellow of the Royal Academy (FRAM) for his achievements in his career. Carmine currently plays a violin by Nicholas Lupot made in ca 1780. Carmine’s distinguished talents were acknowledged by his country which bestowed upon him the National Order of Merit – M.O.M. (F’Ġieħ ir-Repubblika).

He recently directed and performed with the Baltic Neopolis Orchestra as part of their Great Concertmaster series in Poland. Last November Carmine was invited to give a recital at the Frankfurt Opera as part of the Malta Culture celebrations in Germany. Future performances include a performance of Vivaldi’s Four Seasons in Malta and Bottesini’s Grand Duo with the Oxford Philharmonic.