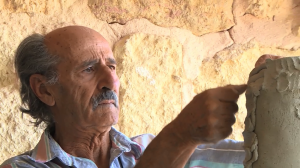 Paul Haber was awarded with the Malta Society of Arts’ 2018 Gold Medal in recognition for his contribution to the arts during a presentation held at the Concert Hall of the Malta Society of Arts, Palazzo de La Salle, on Thursday 6 December 2018 at 7pm. The private ceremony was held under the patronage of H.E. Marie Louise Coleiro Preca, President of Malta.

Born in Gozo, Malta, Paul Haber graduated in ceramics from Central St. Martins College of Art in London after following intensive studies in art and sculpture in Malta, Italy and the UK.

Today Paul produces unique ceramic art works, which although dissimilar to each other, bear the imprint, inspiration and skilled execution which connects each superb piece created by him.

Although intrinsically simple in form, Paul’s works invoke a power which belies the seemingly effortless building techniques culminating in the final creation. His choice of glazes, whether in bright or muted hues, or even the lack of glazing, when he is impelled to use the natural colours of the different clay bodies as his canvas, are in perfect harmony, complementing the inspired idea exposed to the viewer in a myriad of forms and shapes. These are at times deformed or purposely distorted to engage the audience and stimulate each viewer to allow for personal interpretation.

Without forcing himself or the material he treats with sublimity, Paul produces exciting works, which like his own spirit, are uncomplicated but strong, minimal but at the same time laden with feelings and inspirations etched on his soul through a lifetime of memories, impressions and experiences.

Paul has exhibited his works in several collective exhibitions and personal shows in museums and art galleries in Malta and abroad, with the most important ones being his exhibitions at the Lincoln Centre in New York, at the Council of Europe in Strasbourg and his retrospective exhibition in the Bank of Valletta series.