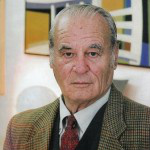 Harry Alden stands out singularly as the person who in the 1960s introduced the hard-edge technique onto the local art scene and through his contribution both as an artist, as well as an art teacher, he made a name for himself within the mainstream of Maltese artists over the past fifty years.
Born in Valletta on the 15th December 1929, Alden pursued his art studies from an early age at government schools and at the Government School of Art from 1953 to 1962 when he was awarded the School’s four-year art scholarship, to pursue further studies at the Croydon College of Arts, in the UK. In 1966 he obtained the College’s National Diploma in Design in three years instead of four, thus dedicating the final year of the scholarship to textile design and printing. At Croydon, Alden studied under the famed artists, Bridget Riley, Allen Jones and John Hoyland..

Alden’s works include murals for the British Council in Malta (1970), St Michael’s Training College (1971), The Via Sagra, and four large painings for the Carmelite Church in Balluta, Sliema (1988). In 2007 he was awarded the Midalja ghall-Qadi tar-Repubblika and in 2013 the Gold Medal from the Malta Society of Arts, Manufactures and Commerce.